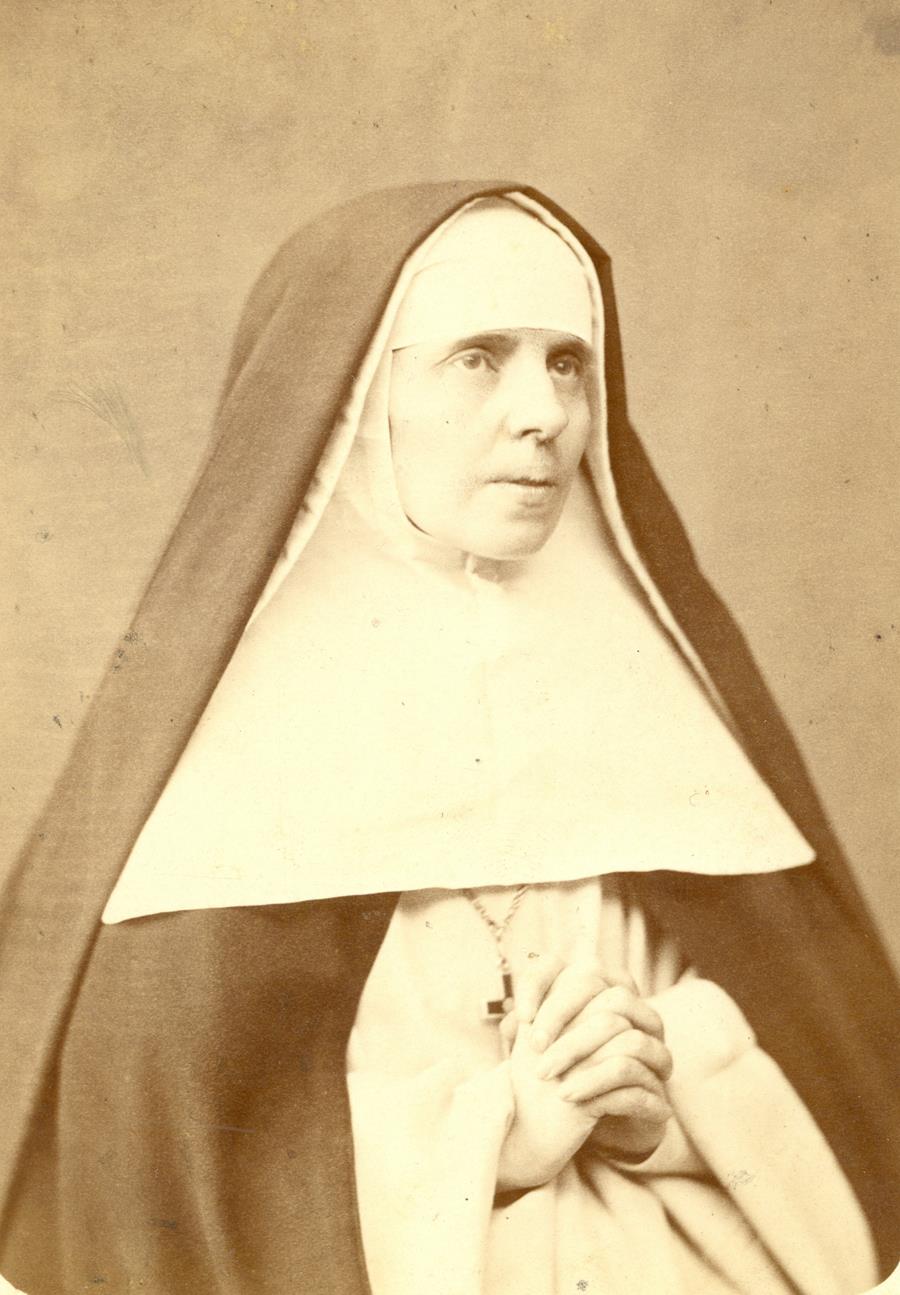 Latent. It’s not a word often seen in English, but it perfectly describes both Mother Kolumba and the Eucharistic Presence around which her life revolved. Latent, meaning “hidden”, might be used to describe one’s talents, but not usually in a positive way—“Your son has latent talents” is a polite way of suggesting that he’s letting them go to waste. This is the one sense in which latent does not apply to Mother Kolumba, who dedicated every gift at her disposal to serve God and others. Otherwise, hiddenness is a recurring theme throughout her life, even to describing her well after death.

When Roza Bialecka (later Mother Kolumba) was born in 1838, even her homeland was hidden from recognition—Poland was wiped off of the maps for one hundred years, torn into three pieces by neighboring countries. Where the Bialeckis lived is now part of the Ukraine and occupied largely by Orthodox Christians, but Roza’s parents bequeathed to her both sincere Catholicism and Polish patriotism. Although they were of the wealthy noble class, the Bialeckis were known for their charity to anyone in need. Roza was especially sympathetic to the peasants: politics had stirred up strife among them while doing little to relieve their poverty or illiteracy. Roza believed that a real Christian education would alleviate both their poverty and their discontent. This hidden conviction grew in young Roza along with the tuberculosis that would plague her life. Because she had fallen ill, the eight-year-old even received First Communion in bed. But Roza did not let her poor health keep her from serving the Lord: already at age twelve, just having received Confirmation, she vowed to serve God in consecrated life. She likely dreamed of hiding herself away in a cloister; all active women religious had been expelled from Poland some time ago.

But God provided otherwise. The head of the Dominican Order, when presented with Roza’s desires, perceived latent abilities in the tiny seventeen-year-old. Master General Fr. Jandel proposed that Roza become a foundress, beginning her own Congregation of contemplative-active Dominican Sisters! Never mind that Roza wasn’t even a Sister yet—Fr. Jandel suggested that she leave her family and homeland behind to receive formation in a Dominican convent in France.

Believing that Fr. Jandel had revealed the hidden will of God, Roza spent two years in Nancy, France. Becoming Sister Kolumba there, she struggled greatly with homesickness, but resolved to give up everything for God’s sake. When she returned home with her superiors’ blessing to begin a new foundation, future outcomes remained hidden from view. Both Fr. Jandel and Sr. Kolumba knew that the necessary permissions and provisions for a new foundation might not materialize. If such were the case, Sr. Kolumba was prepared to return and remain in France. Sr. Kolumba was only twenty, not even legally an adult at the time; she had no companions to start the foundation, no place, no prospects. But the diminutive woman possessed hidden treasures: an ardent love of the Eucharist, firm trust in God’s Providence, warm dedication to the Blessed Virgin and the Dominican spirituality, and exceptional maturity, tact, and wisdom. Uniting these with the dreams of a newly-assigned pastor, Fr. Leczszynski, she resolutely set about establishing Dominican Sisters in Wielowies, a malarial village. Bypassing more appealing locations, Mother wanted her Sisters to live among the poor and needy, even in hidden, out-ofthe-way places. Along with building a convent from the ground up, Mother Kolumba formed new Sisters to carry out an apostolate ahead of their time: scriptural and sacramental catechesis in any available venue, teaching all manner of children in schools, and caring for any sick and needy who called upon them.

In true Dominican fashion, this busy activity hid its source in contemplation. Mother expected her Sisters to ardently pray the Divine Office, set aside time for daily meditation and yearly retreats, and—above all—adore Christ Latent in the Holy Eucharist. It is no exaggeration to say that Mother’s spiritual life revolved around this Hidden Presence. She strove to spend every moment spiritually united with Jesus in the Tabernacle, and she desired that this Eucharistic love characterize her Sisters as well. Mother arranged for the Sisters to spend the first Thursday of each month in Adoration of the Blessed Sacrament, even though—at the time—such Exposition required special permission from Rome. Equally unusual was Mother’s encouragement of frequent reception of Holy Communion, as she knew that the Blessed Sacrament provided all necessary graces. She urged the Sisters to visit the Blessed Sacrament eagerly and frequently—in sum, to “live for Jesus the Host.” Mother also knew that Jesus’ Hidden Presence was often neglected, abused, or scorned, and she believed that part of the Sisters’ purpose was to atone for this.

The other hallmark of Mother’s spiritual life was her love of the Blessed Virgin Mary. From very young, Roza had loved praying the Rosary and visiting shrines dedicated to Mary. She considered that Mary “numbered her among her children” on the day she had received First Holy Communion—the Feast of the Immaculate Conception—and Roza happily numbered herself in an Association of Mary’s Children and a Rosary Confraternity. Mother routinely entrusted her spiritual sacrifices to God through Mary’s hands, but the depths of her devotion seemed hidden from her own awareness until the day of her death. Then she exclaimed, “Oh, I did not know I love the Mother of God so much! …I love Her so much!” Already, Mother had passed on this love to her Sisters by embedding Marian devotion in their daily life, from saying the Rosary in common to singing Marian hymns every morning, evening, and night.

Mother’s wisdom was revealed in other aspects of religious life as well, from her practical instructions for caring for one’s health to those for living in a spirit of sisterly love, simplicity, freedom, gratitude, penance…the list goes on. God seemed to have hidden in Roza Bialecka all the skills necessary to found and guide a religious Congregation—but this was by no means easy. Mother Kolumba may appear bold, but she had to fight an inborn timidity. She rejoiced over many Providential graces, but her melancholic temperament struggled with monotony or depression. Her affectionate heart usually found reciprocation, but was repeatedly broken by the deaths of young Sisters and family members. Villagers acclaimed her work, but some countrymen, clergy—and even the occasional “friend”—vilified it. Still more of her spiritual burdens remain hidden to us. But one example reveals an additional cross: that Mother struggled with uncertainty over her own vocation. After years of mounting differences with Fr. Leczszynski—not seeing eye-to-eye, for example, on how much the Sisters’ life was to be contemplative, how much they were to fast, or whom they would accept as postulants—he effectively exiled Mother from the Congregation. He sent her to Lvov and encouraged her vicar’s plans to usurp control. Mother spent several months in Lvov without the relief of spiritual direction, knowing that one of her own Sisters colluded with Father to replace her as Mother Superior, and reluctant to reveal anything to the Bishop that might reflect negatively on the priest she respected so much. Hidden doubts assailed her. Did God really intend for her to lead this Congregation? Had she in fact been called to a cloistered community all along? Willing to relinquish all claim to her foundation, Mother applied to enter a cloistered convent and asked the Bishop to relieve her of her duties. She did not name the actual issues—the facial cancer that affected Fr. Leczszynski’s thinking, their differing viewpoints, or the inability to direct the Congregation according to her conscience.

Although Mother’s real struggles were hidden, the Holy Spirit intervened. The Bishop granted permission, but his secretary unexpectedly urged her to continue the work she’d begun. Mother obediently returned to Wielowies, charitably dealt with the Sister who intended to replace her, and generously dedicated two Sisters to care for Father in his last days. Even after the cancer took him, Mother only recalled gratefully all that Father had done for the Congregation. Inculcating this characteristic gratitude in her Sisters, she pledged them to pray for Father—as for other benefactors—for perpetuity. Mother even hid the hurt, and her own role in the foundation, when a friend of Fr. Leczszynski wrote of him as the Founder of the Congregation. But these were not all of Mother’s troubles. Her tuberculosis never remained latent for long, and Mother feared that she would die before the Congregation was solidly established. Despite the dangers of travel, Mother resolved to go to Rome, mid-winter, to seek papal approval of the Constitutions that she had translated, revised, and reworked again. Her efforts were rewarded by receiving a Laudatory Decree for the Congregation from the Holy See in March 1885. After serving as foundress and General Superior for almost 25 years, Mother rejoiced in such confirmation.

Still, Mother did not rest until she had established a third mission house, appointed a different Novice Mistress, and consolidated her teaching in last instructions to the Sisters. Mother desired to die on the vigil or feast of St. Joseph, and so she did on March 18, 1887—consumed by tuberculosis, unable to swallow due to sores covering her throat, but still showing concern and kindness for those around her. Her last concern was to remain hidden after death: out of humility, she insisted that nothing should be said or written about her. For decades, Sisters honored Mother’s wishes, keeping her holiness to themselves. Thus, even though Mother was already regarded as a saint during her lifetime, her cause for canonization remained latent—unopened until almost a century after her death. Finally, in 2004, John Paul II promulgated the Decree of Heroic Virtues in Mother’s life. While this short summary cannot do justice to her virtues, life, and wisdom, we hope it sparks interest for your own exploration. To borrow the words of a Vatican official who investigated Mother’s Cause, “[Y]ou do not have to force yourself, but…if someone enters authentically onto a path of holiness and starts reading her works, they will be astonished to discover their own admiration for her greatness.”